British Columbia’s automotive industry is facing a growing labour shortage that, if left unaddressed, will cause serious disruptions for the industry. As up to 20 percent of its workforce is expected to exit the automotive sector by 2026, significantly to retirement, women are seen as a potential untapped talent pool to fill vacant positions.

In 2021, women account for nearly half of the Canadian labour force and are openly encouraged to pursue any career of their choice. Although progress is undeniable, the work is not complete. Many fields are still male-dominant, especially in the technical side of the automotive industry. Male career dominance is especially seen in automotive skilled trades, non-trade labour, executive roles, and dealership roles, where the average number of female workers is only five percent.

Although the proportion of females working in the automotive industry is slowly increasing, women continue to encounter barriers and challenges that hold them back, such as a lack of exposure to the trades, misunderstandings of what trades jobs entail, and improper treatment at work.

To better understand the female experience in B.C.’s automotive industry, gain a deeper understanding of specific issues, and develop further insights into the barriers and challenges that women face at work, the Automotive Retailers Association (ARA) has conducted two industry surveys and 15 one-on-one interviews.

Based on the first survey results, made up of 62 males, 38 females, and one gender diverse person, 85 percent of responders consider their current work environment as welcoming and accepting of all people. However, as reported, 70 percent of these workplaces have not implemented any measures, such as mentorship programs, training, or changes in hiring process, to actively accommodate women.

Studies have shown that having a strong network is influential for female career success, and 59 percent of women surveyed indicated a desire for female networks. Mentorship is a strong retention factor for all millennials, but particularly for women in the trades, since they start on unequal footing when compared to men in similar circumstances.

32 percent of female responders think that male dominance in the automotive industry is problematic. Some of the overall opinions included statements that everyone drives cars, so it should not be only men who fix them, or that many shops are not representative of the people they serve, adding to the perceived knowledge imbalance.

The women surveyed predominantly stated that someone in their lives brought them into the automotive industry. Only 22 percent stated they began their careers out of an interest in cars. 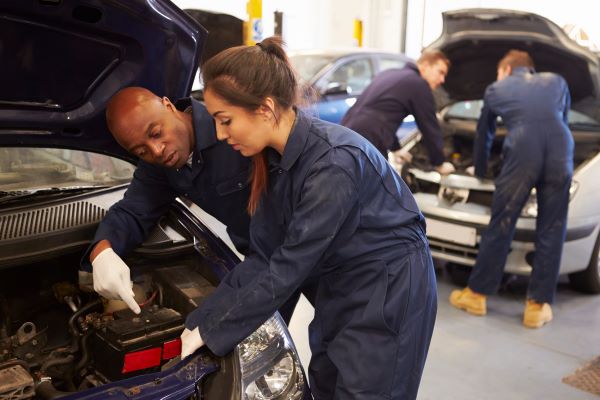 When asked about gender discrimination at work during interview discussions, 13 of 15 interviewees mentioned customer bias. These were current stories, with people claiming to encounter these problems almost daily. Males, females, bosses, and staff members all told stories of customers telling a woman that they “won’t have a girl working on their car,” or that the repair work “is a man’s job.”

Discrimination from customers is a challenging and present-day problem that can lead to resentment on the part of the female staff. Although most female respondents do not seem to blame their management for how customers act, they still make it clear that the discrimination and lack of trust in female workers is hurtful and frustrating.

Overall, respondents did not seem to know about any resources available to help women through problems at work related to the more subtle forms of gender discrimination. At best, women identified leaders within their organization that they felt they could turn to, and some bosses identified themselves as someone they hoped their employees would feel comfortable approaching to discuss issues like these. In the interviews, women expressed that reliable resources for these situations would be extremely beneficial and desired.

In conclusion, it is important to note that many women enjoy their automotive careers. Those women reported that they have supportive team members, good bosses, and have had positive experiences with customers. Women who had the most positive attitudes about their job and the automotive industry also spoke of strong friendships and bonds at work, another indication of the significance of good networks.

As a supporter of the diversity and inclusivity within the automotive industry, the ARA is proposing several recommendations to attract more women into technical positions to address industry labour shortage. To help create a comfortable work environment, it is advised to build role models for men and women in the automotive industry. As the majority of surveyed women indicated a desire for female networks, supporting and promoting such networking opportunities is recommended, such as creating a forum where women can share stories, collaborate, and connect with male allies.

The survey results indicated a lack of awareness of existing resources that help women in the automotive industry, should they experience gender-based problems at work. The possible solution could be raising awareness of B.C. government authorities that support women in trades, such as the British Columbia Centre for Women in the Trades (BCCWITT) and the Industry Training Authority (ITA).

To help change public perception of female automotive workers and build public trust in their work, it is recommended to start a public campaign featuring female workers as skilled professionals.

Lastly, it is recommended to conduct additional research to reach women who left the automotive industry in order to determine what pushed them to leave and what the differences are between those who stay and those who exit. There should also be inquiries into why technical non-trades have higher female representation than skilled trades.

You can review and download the full report, Women in the Automotive Industry: Increasing Female Representation within B.C.’s Automotive Workforce to Combat the Growing Labour Shortage, here. 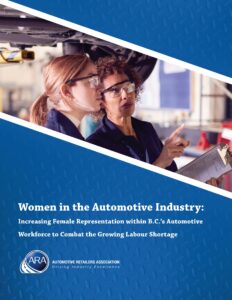